In 2012, Telltale Games began releasing the episodic series that would make it a household name. Coming after games based on Back to the Future and Jurassic Park, the latter of which received poor critical reception but helped to perfect the developer’s formula, The Walking Dead was a breakout success. Charting a path through the morbid world of Kirkman’s seminal comic book series, Telltale opted to invent its own characters and tell its own story that would take place in the same world occupied by Rick Grimes and his group of survivors. It’s a method that’s been mostly repeated throughout its ever growing catalogue in such adaptations as Game of Thrones, Minecraft, and Tales from the Borderlands.

When we first meet Lee Everett (Dave Fennoy), he’s cuffed and sitting in the back of a police car traveling down the highway. We begin to learn why he was there gradually as Episode One unfolds. The truth, that he murdered the man who was sleeping with his wife, isn’t shocking in the context of the world he enters shortly after the game begins. Even so, the series offers him redemption in the form of a little girl left alone when the world falls apart.

The truth is, the old world is already lost for Lee. He’s looking at a lengthy stay in prison, possibly even a lifetime; the free, civilised, organised world is already gone for him. Yet he doesn’t relish the second chance that the zombie apocalypse affords him, and that’s a crucial element of his character. The first two episodes of the series, A New Day and Starved for Help, are driven forward by central themes and a collection of well-rounded characters are thrown in to give those themes life. The first episode takes us through a variety of settings, sprinkling in some service for fans of the series in an organic way. Glenn Rhee cameos throughout the episode before he takes off to, as fate would have it, wind up with Rick Grimes, and Lee spends a short stint of time on Hershel Greene’s farm, a setting very familiar to franchise followers.

Curiously both Hershel and Glenn, prominent members of the comic book in events that succeed this episode, contradict the central theme of the episode. If A New Day is about letting go of the old world, then Hershel’s inability to understand the severity of the situation and Glenn’s commitment to finding his friends in Atlanta are both in direct opposition to that theme. Everything experienced by Lee and Clementine (Melissa Hutchison), the eight year-old girl whom Lee vows to protect without hesitation, is written in aid to this through-line. As such, shortly after leaving the farm, the two of them, along with Kenny (Gavin Hammond), Kenny’s wife Katja (Cissy Jones), and their son Duck (Max Kaufman) find themselves in Macon, where Lee grew up and where he would discover the fate of his family.

The most obvious example of the new world insisting that its occupants let go of the old one comes at the very end of the episode. Taking refuge at the Motel nearby, three of the main cast begin to speak with renewed optimism. The military will come in, fix this mess, and everything will be back to normal before long. Then the power goes out at the Motel and their world is shrouded in darkness. Man discovered fire and light signifies civilisation. Now it’s gone.

In Starved for Help, less ground is covered and most of the episode’s runtime is spent at a nearby dairy, where a mother and her two grown boys have offered to host the hungry and miserable group of survivors with promise of a home-cooked meal. The Dairy, as it so happens, has not succumbed to the trauma of the outside world. Its electric fence runs on gas and the place is stocked well enough to keep the small family fed with plenty to spare. The episode is less free-flowing than its predecessor, opting instead for internal politics and moral dilemmas, the latter coming to a head with the final decision before credits. It’s a slow burn, luring the characters, and even the player, into a false sense of security.

Once it starts to reveal the true nature of their hosts, the series embraces its roots in horror. From the blood-soaked cutting room to the horrific and iconic shot of a failing Mark, legless, pleading for Lee’s help, Starved for Help abruptly turns into a nightmare. If Episode Three proves anything then, it’s that the writers on the game know exactly how to shift tone at the click of a finger. Long Road Ahead is the lowest point for its characters, confirming how expendable they are and concurrently dangling just the right amount of hope to keep things from delving into a kind a of torture porn. By Episode Four, only three of the original characters are left.

The penultimate episode begins to spin the wheels just slightly, repeating Starved for Help’s theme of the danger that humans pose in the new world by different means – a group of elitists who believe there isn’t any room for the young, sick, or elderly – and ultimately filling time with a quest that proves utterly meaningless. Kenny’s driving motivation from Episode Three onward is to find a boat and get off of the mainland, and yet it’s too easy for the player to see how fruitless that desire is. Around Every Corner does maintain some mystery to keep things feeling relevant, but those mysteries struggle to justify its slow pace regardless.

Even when events become tedious, such as the drawn-out search for supplies in the crawford community, the heart of the entire story continues to beat. The relationship between Lee and Clementine is endearing and, I think as age will prove, timeless. The deep depression that Clementine steadily slides into is impossible to ignore, and as the player we’re so desperate to project through Lee some semblance of optimism or hope. Though that’s easier said than done. There’s a haunting scene in Around Every Corner that takes place in the attic of a house that the group takes refuge in. Kenny stumbles upon a child, withered away to almost nothing but bone, suffering a slow and horrible death before returning as a walker that can’t even stay on its feet.

This moment tells two stories. As Lee comments, this could have been Clementine’s fate had he not found her all the way back at the beginning; this offers a humbling perspective for the character. It’s also a poetic, painful reminder for Kenny of the fate of his own boy. Choices may not impact the narrative as fundamentally as some might like, but the visceral, emotional impact is no better exemplified than here, when we must choose whether Lee will put the walker down or leave it for Kenny to try to help him find some closure amidst all of this tragedy. These resonant moments help to keep Around Every Corner from becoming entirely unnecessary. And the result of their belated stay in Savannah instigates the devastating twist that drives us toward one of the most memorable finales in modern gaming.

Episode Five is one of the best episodes of any series Telltale has produced. From Lee’s declining health offering a tried and true ticking time-bomb scenario, and his desperate search for Clementine providing a much needed brisk pace following a couple of slower entries, through to the heart-breaking final scene, No Time Left is an astounding climax to a worthy journey. The villain is not truly a villain at all, but a victim of circumstance and bad luck. He believes he has good intentions but he makes a poor argument for the choices he makes. The game tries gallantly to phase out the remaining supporting characters, yet their exits mostly feel sudden and essential to clearing the way for a final thirty minutes focused solely on the headline relationship.

To this day, devotees of the game and the developer languish over the loss of one of the best characters this multi-platform franchise has ever spawned, and the season in its entirety is considered one of Telltale’s famed trinity. It is by no means flawless. The remaster does not solve the loading times or occasional drops in frame rate, though the updated lighting and sharpened lines are worthwhile if not dramatically game-altering. The gameplay too won’t appeal to everybody, a mix of quick-time events and timed dialogue choices. 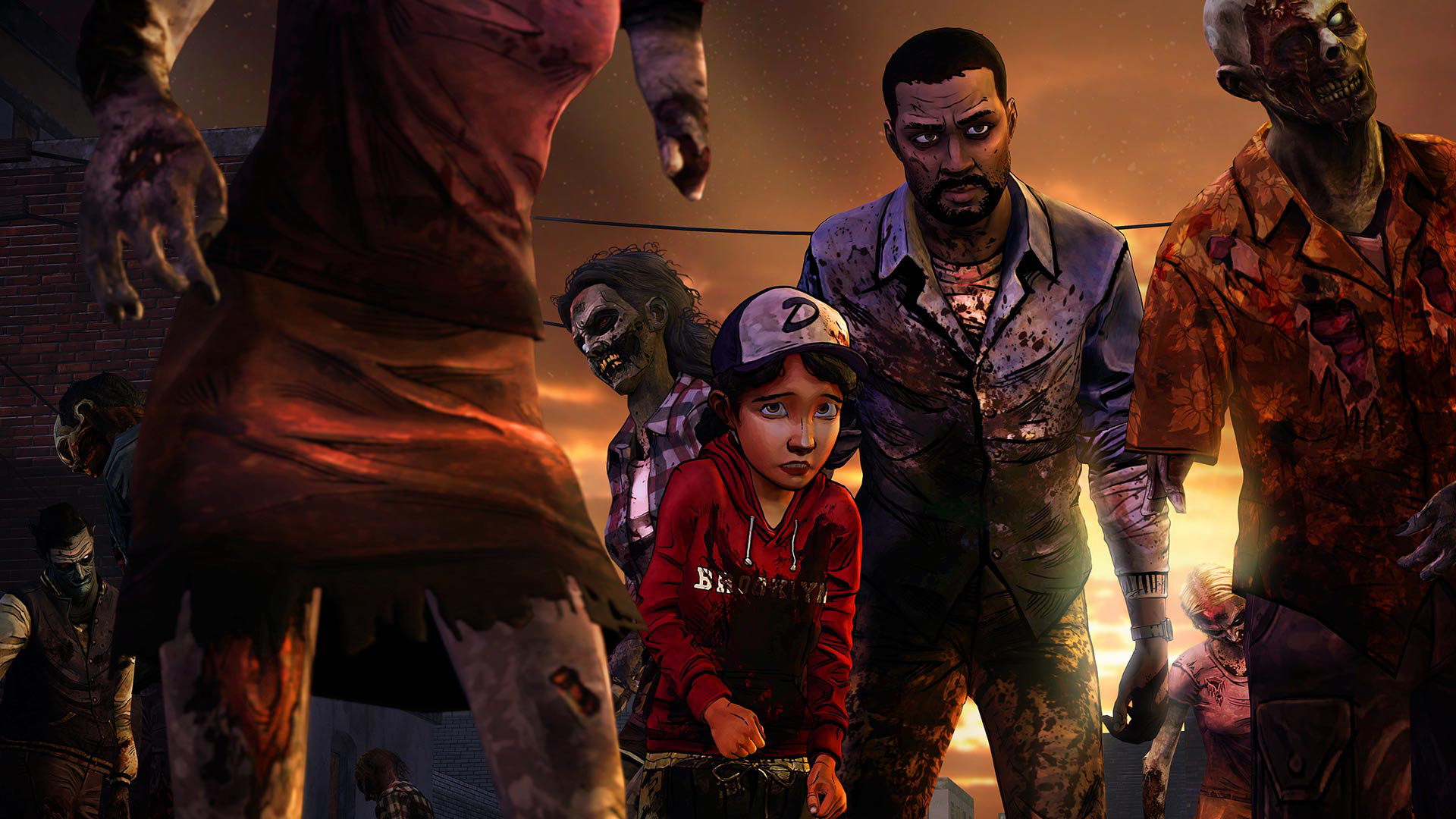 There’s more exploration here than in more recent Telltale Games, but the writing is the selling point. The dialogue bounces from witty to comedic to tragic at the press of a button, but the game only occasionally tries to really tell its players how they should feel (as with Ben, whose comedy of errors becomes a parody). The game is so intrinsically about the relationship between an incriminated man and a little girl, and maintaining and growing that relationship across the five episodes. Because of that, it’s a purposeful, meaningful, and emotionally draining adventure worthy of its accolades.

The Walking Dead Collection is available across multiple platforms now, and contains Seasons One through Three plus DLC episode 400 Days and the three-episode mini-series The Walking Dead: Michonne.

Listen/Subscribe to The Film ‘89 Podcast.